I bet many of you didn’t know I tried committing to a vegetarian lifestyle couple years ago. It started with pescatarian (seafood only) for 3 months, then vegetarian for a month before giving up. Trust me, it felt very good changing my eating habits. It wasn’t too hard either since I LOVE carbs and potatoes. I felt healthy and energetic everyday, but being the bodybuilder that I aim to be, getting protein became more and more difficult. Protein shakes can get pretty gross and tiring! I tried about every vegetarian restaurant in YEG already, so when I heard about the new all vegetarian Vietnamese restaurant opening up, I knew I had to try it.

An Chay translates directly to “eat vegetarian” in English. My co-worker spoke highly of this place since her family friends own it, so we decided to try it out for lunch.

Price wise, it’s more expensive than your typical Vietnamese restaurant. That’s a given since all vegetarian restaurants tend to be more expensive, which I never understood…

As much as I love salad rolls (no joke, they are my one true love), I didn’t order any since I already ate over 13 rolls the night before, and some for breakfast… Not so #meatless after all huh.

Most people at our table chose pho. I asked to sample their pho so I could write my review on it (thanks hehe). It’s loaded with veggies and noodles. Personally, I prefer my pho to have beef, tendon, tripe, and all that good stuff, so I did missed the meat. Their broth packs a punch of flavour resembling beef bone though.

When this dish came out, we could all smell the strong peanut aroma. It’s smells absolutely delicious; however, the broth was very rich and all you could taste were peanuts. The noodles were also stuck together, making it very difficult to eat without making a mess. My poor co-worker had splattered the brown sauce all over her white shirt! 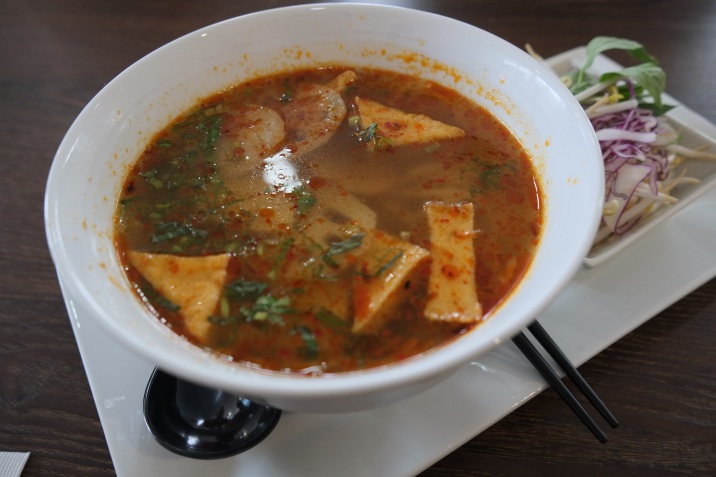 Reading Linda’s review, I completely agree with her — this is not your average BBH. There’s a good ratio of noodles and toppings, and the broth is completely different (just like the pho).

I opted for the vermicelli special/bun 3 mau. Not going lie, the spring rolls sold me. Everything was delicious in this dish and it had a great topping to noodle ratio. Most restaurants tend to skimp out on the meat! The spring rolls were crispy and fried with fresh oil. The “meat” added a great flavour and texture to the overall dish. The “fish” sauce added a kick of spice. Let me tell ya, you won’t be missing out on the meat with this one. I felt content and very happy with my choice.

That’s it. The first vegetarian Vietnamese restaurant in YEG. I have high hopes for this place, and plan on trying some of their appetizers (SALAD ROLLS) next time. Only downside are the portions. We finished the dishes easily and still felt hungry after. Could’ve gotten a XL pho at any restaurant for only $12 and be full off that. I guess that’s the trade off for healthier options.

2 thoughts on “YEG’s 1st All Vegetarian Viet Restaurant: An Chay”